THE ROLE OF BIOGAS IN THE EUROPEAN ENERGY TRANSITION

Secure, sustainable, low-emitting. Biogas can be ​the ally in the decarbonization of the European economy and for the European energy transition, as demonstrated by countries such as Italy and Germany​ 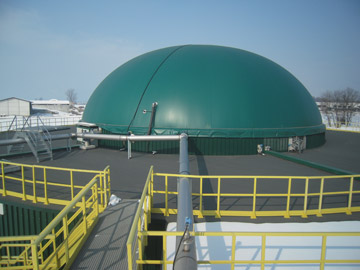 The fight against climate change has become an integral part of the international political agenda following the enforcement of the Paris Agreement. Consequently, it is now at the center of an international political debate. In order to achieve the goals under the agreement, it will be necessary to further reduce emissions in the energy, transportation and construction sectors, as well as throughout the industrial sector.

Generating energy from renewable sources and energy efficiency appear to be the way forward. Analysts and scientists agree that it will be crucial to rapidly stimulate these sectors in order to attain the set goals. According to a joint study recently presented by the International Energy Agency (IEA) and the International Renewable Energy Agency (IRENA), energy-related CO2 emissions could be reduced by as much as 70% by 20501, by focusing strongly on decarbonizing the energy economy. But to achieve these objectives, the agencies warn that "a deep transformation of the way we produce and use energy" would need to occur. According to the report, USD 29 trillion of investment will be needed from now until 2050.

However, such investments will have a positive impact in terms of:

Biogas will itself play a decisive role in this scenario. Furthermore, according to IRENA's "Remap 2050" program (which determines the potential of countries and regions to increase their renewable energy share in order to ensure an accessible and sustainable energy future), renewable energy use in 2050 will be four times higher than it is today (renewables currently account for around 15% of the global primary energy supply). Around 40% of renewables will be used for power, while heating and other uses will account for 44%. The biogas industry therefore has the potential to carve out a sizeable share in both the electricity production and transport sectors. In addition, the transport sector alone (including civil aviation) accounts for around 23.2% of European greenhouse gas emissions2. Taking only heavy-duty transport into account, this percentage falls further to 5–7% of total EU emissions3​​. 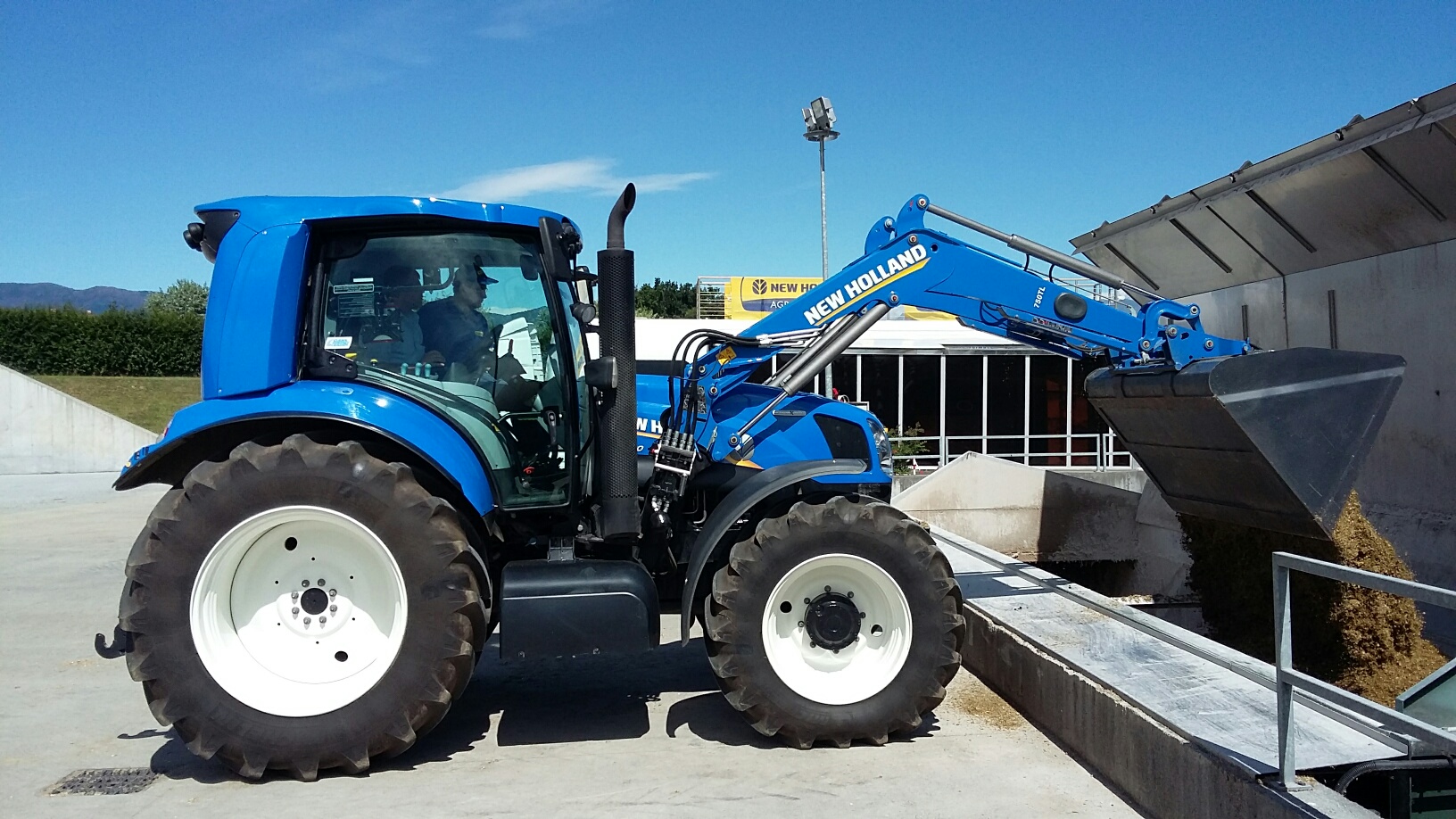 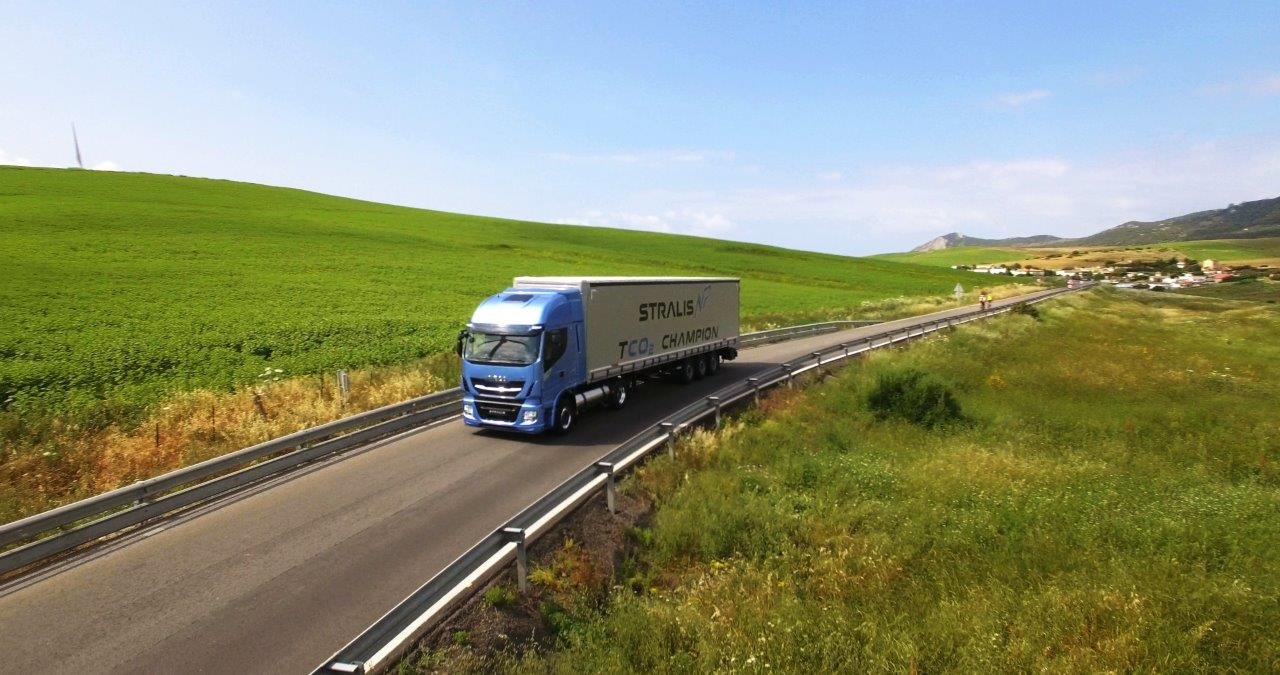 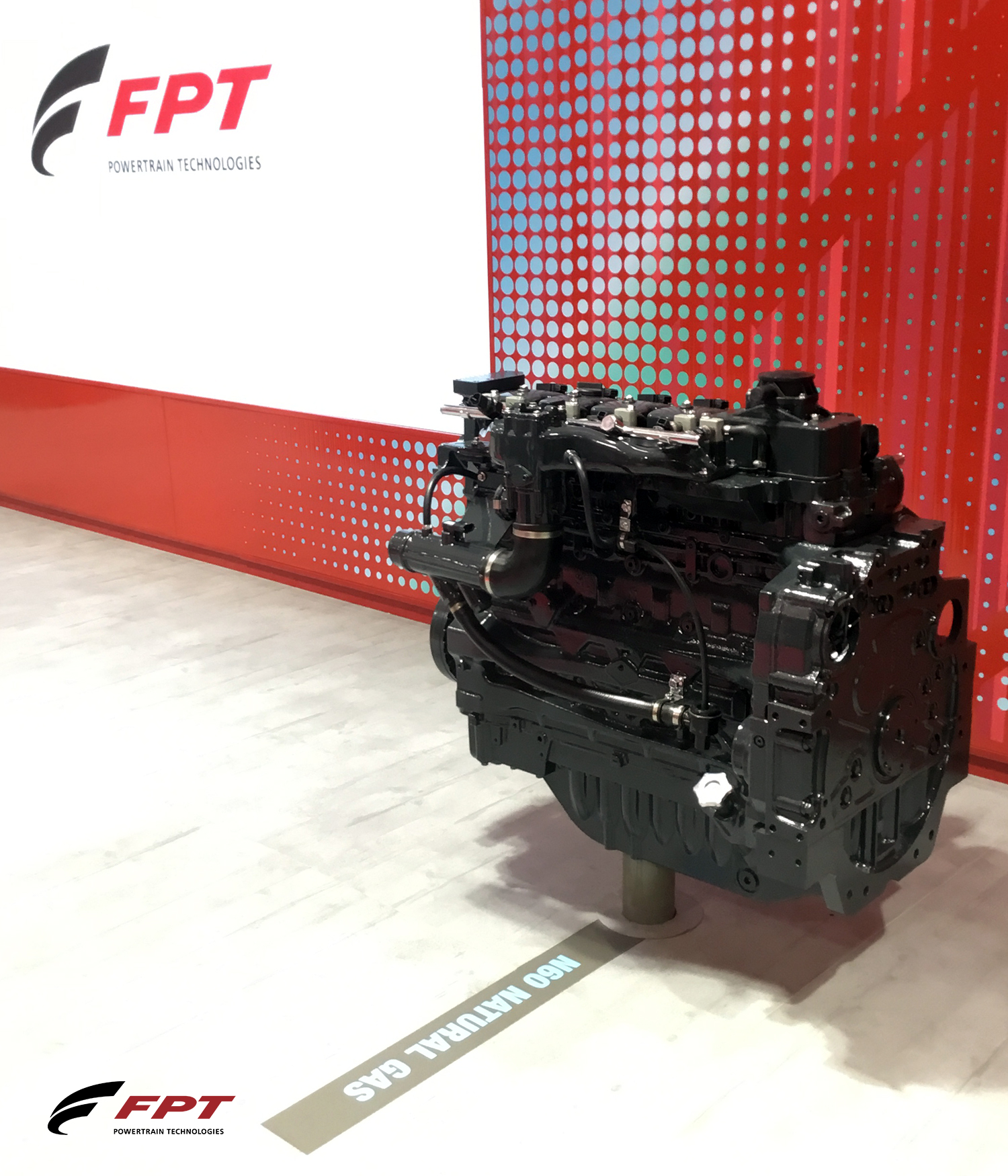 ​​With over 25 years of experience, FPT Industrial is a market leader and innovator in Natural Gas engines: NEF 6 NG is its prototype for Natural Power in agricultural applications.​ 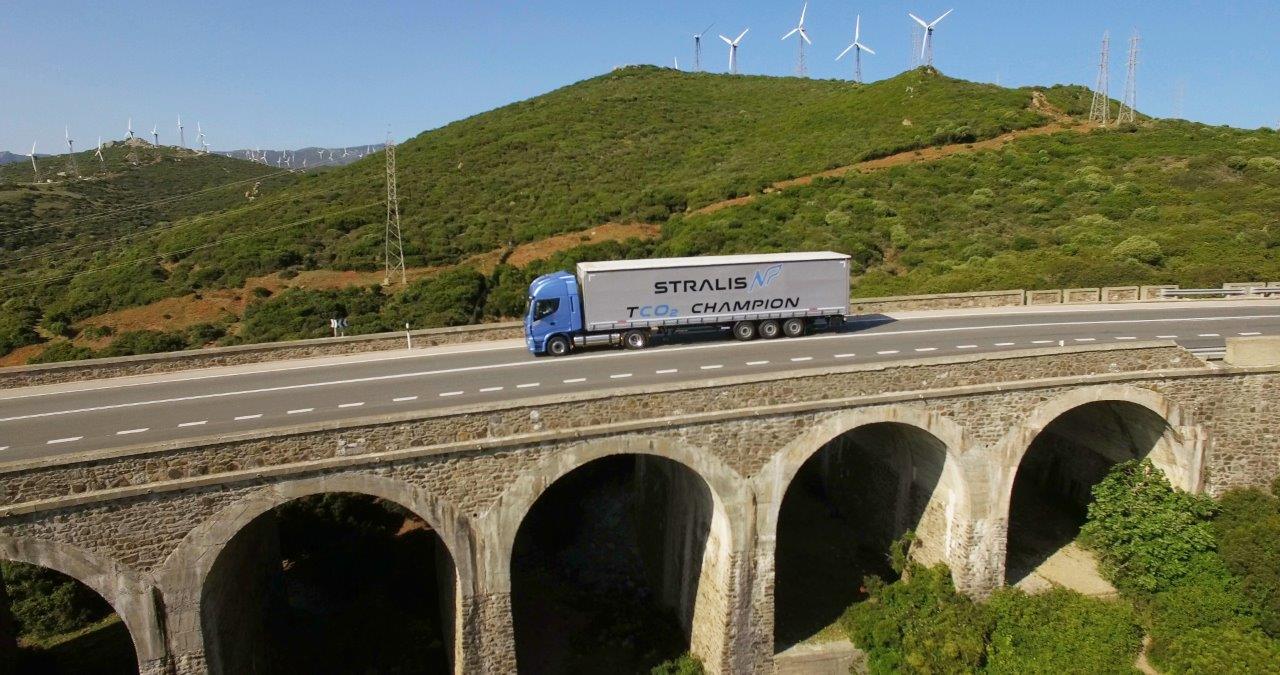 The IVECO Stralis NP has been developed to respect all the environmental regulations, also the most restrictive​ 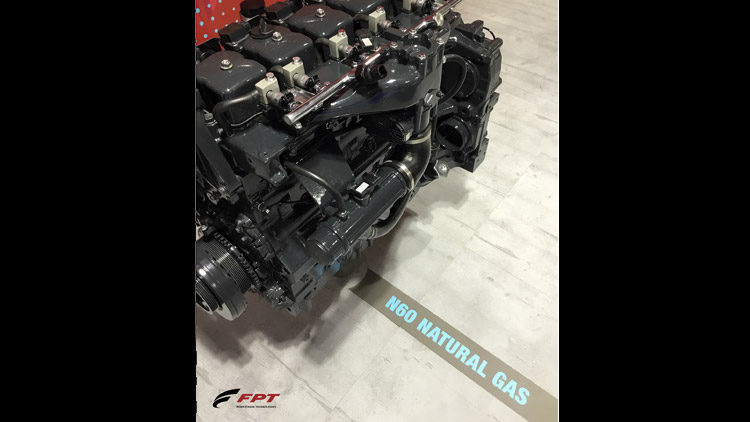 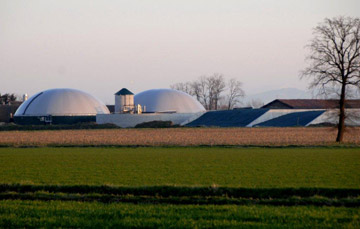 Biogas, an ally in the energy transition and the decarbonization of transportation

Biogas is a renewable energy source obtained from the anaerobic digestion of biomass from agricultural residues, livestock waste, sewage effluents, sequential crops and the organic portion of separated urban waste. It consists of 45 to 70% methane, with carbon dioxide being the second main component. It also contains water vapor, hydrogen sulfide and ammonia in small percentages. Biogas produced from organic biomass is first cleaned of impurities and can then be converted into biomethane during the upgrading process (where carbon dioxide is extracted). The refining system, which takes place through membranes and special filters, is able to produce purified methane capable of replacing all fossil fuel resources.

In Europe there are currently three major sectors linked to biomethane production. They are anaerobic digestion, biomass gasification with syngas conversion into biomethane, and power-to-gas technology, which was devised for hydrogen production and energy storage. "The first is the classic process, the one that is best known and most widespread," explains Andrea Gerini, Secretary General of the NGVA (European Natural & bio Gas Vehicle Association). "Gasification, on the other hand, is a more complex process that is widely used in North Europe, where woodworking residues are utilized. The third sector is the one that looks more to the future. It’s a means of storing electricity from renewable sources, using hydrogen as an energy carrier for the production of methane at peak demand periods." According to the latest data provided by EBA (the European Biogas Association), there are currently 17,376 biogas and 459 biomethane plants operating in Europe4. They generate a total amount of 60.6 TWh of electricity, corresponding to the annual consumption of 13.9 million households. Germany remains the leading country, with 185 biomethane plants. However, the number of plants is also increasing in the UK (43 new installations), France (12), Switzerland (11) and Denmark (6).​ 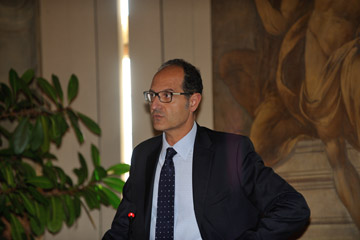 Biomethane produced from biogas exemplifies the circular economy concept, because it involves using waste and refuse from conventional production processes to obtain further benefits—in this case a sustainable fuel—and thereby avoiding wastage of materials and energy. An economy based on this approach is a sustainable economy capable of getting the most out of waste, abandoning the "produce-consume-discard" philosophy and reducing carbon emissions. For this reason, biomethane is now considered an ally in the decarbonization of the economy, particularly in the transport sector. "Our association’s interest in promoting biomethane stems from the fact that it’s an extremely clean fuel in terms of particulate matter and exhaust emissions," says Mr. Gerini. "We call it a 'near-to-zero emissions' fuel, especially when compared with conventional and more advanced engines. We need to make a distinction between particulate emissions and CO2 emissions, especially when talking about urban traffic and air pollution problems."

In fact, in terms of emissions, from a well-to-wheel perspective that considers the entire industry from production to use, biomethane fueled vehicles produce practically the same CO2 emissions as electric vehicles using renewable source energy, and 80-90% less than conventional fuels. As for particulates, biomethane fuel generates virtually no PM10 emissions and cuts NOX emissions by 70%. Considering a 40% methane-biomethane mix instead, CO2 emissions are the same as those of an electric vehicle using energy from the energy mix of European production plants. "In the heavy vehicle sector, both liquid and gaseous natural gas have had a major impact, especially in the case of freight vehicles, public local transport and recycling vehicles," Mr. Gerini points out. "With natural gas, sound and vibration levels are almost eliminated: alongside a reduction in air pollution we also get a reduction in noise pollution." 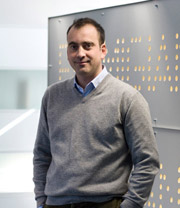 Today there are around 1.3 million natural gas vehicles in circulation throughout Europe. Most are in Italy, a country with a long history of using this fuel. "Germany, Sweden, Austria and Switzerland are the other countries that first believed and invested in creating a natural gas distribution infrastructure capable of supporting the market, as well as others such as Bulgaria, the Czech Republic and Romania," concludes Gerini. "It’s a different situation with regards to liquefied natural gas—LNG—where Spain, thanks to the presence of numerous coastal terminals, was the first to believe in and push for this solution to be adopted for long-haul trucks. Other countries such as France and Belgium are investing heavily in the use of methane for developing public transport and goods distribution, and have contributed best practice examples of biomethane use." 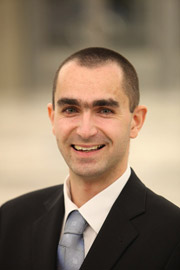 Jan Štambaský: "The biogas industry is now mature"
Reducing climate-altering emissions, promoting sustainable mobility and a circular economy: these are the positive implications for the development of this sector, and not just in Europe. Jan Štambaský, President of EBA (the European Biogas Association), explains.

How can the biogas industry contribute towards meeting the climate goals laid down in the Paris Agreement?
The main advantage of the biogas industry is the wide range of possible applications, particularly in those areas where emissions are effectively reduced. Biogas plays a vital role not only in the energy sector, but also in agriculture, where biogas production favors the effective treatment of various effluents and products that are unsuitable for further treatment. This is a great opportunity to work toward the global climate goals outlined in the Paris Agreement. Of course there is the biogas itself, an energy carrier widely used in combined heat and power production, but also as a vehicle fuel. This is a unique characteristic of biogas compared with other biofuels.

What is the current and future role of biogas in reducing transport sector emissions?
Biogas can be further processed to produce biomethane, which is technically equivalent to natural gas, but generates fewer emissions. Biomethane could therefore power CNG (Compressed Natural Gas) vehicles. It has no mixing restrictions or special infrastructure requirements. Biomethane is the easiest biofuel to produce on a large scale. Of course, the use of biomethane in transport must be accompanied by the development of an infrastructure and a CNG fleet.

The sector’s industry is therefore a perfect example of a circular economy, by taking advantage of otherwise underused resources to create new value.
That's right. Biogas production is a perfect example of the circular economy, especially when talking about its full life cycle. Biogas can be produced from a wide range of biomass sources, while the fermentation residue, called digestate, is in turn a perfect organic fertilizer containing all the nutrients originally present in the biomass. So, we can see two complete cycles:

Germany and Italy are currently the leaders in Europe. What is the situation outside the confines of the EU-27?
The biogas industry is growing on a global scale. In general, we are seeing the biggest progress in urban and agricultural waste treatment applications, where biogas production offers numerous benefits. Let’s also remember the United States and the countries of south-eastern Europe, where rapid development is taking place. ​​