LOWERING THE IMPACT OF LOGISTICS

In managing its logistics processes, CNH Industrial continually strives to find sustainable solutions focused on technologies, procedures, and activities aimed at reducing the environmental impact of logistics processes without compromising service quality or profitability, all while taking account of the social impact of the activities themselves.
The aspects considered in defining technical solutions include type of transport, intermodality, long-haul transport, and packaging design. Logistics processes at CNH Industrial are managed both internally within the value chain, specifically within the functions responsible for manufacturing, sales, and purchasing, and externally, by optimizing the efficiency of logistics flows and reducing their environmental impact. The importance of sustainable logistics to the Company lies not only in time and cost efficiencies, but also in emissions reduction, resource use, packaging management, and, not least, in their indirect impact on human health and traffic congestion. 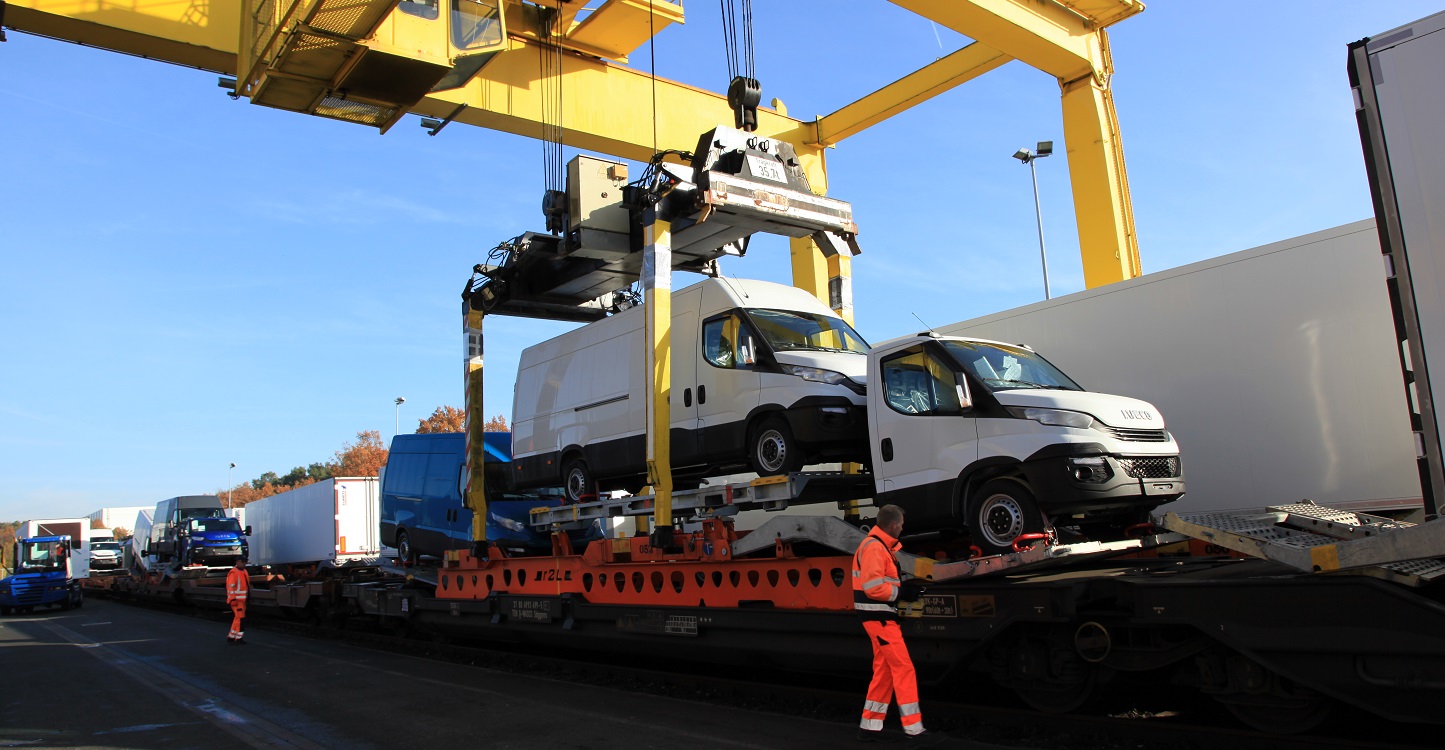 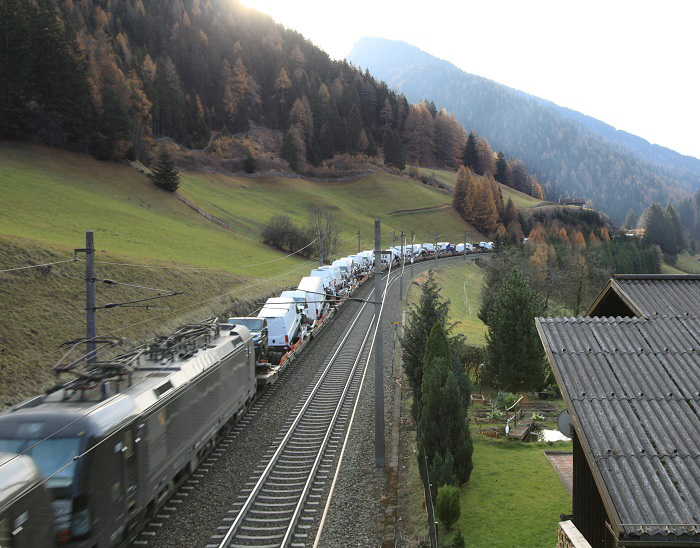 To coordinate its efforts effectively towards improvements in this area,
CNH Industrial published the Green Logistics Principles, which are intended to coordinate the Company’s initiatives on promoting sustainable behaviors, and help both corporate functions and suppliers effectively monitor their performance and meet improvement targets. In line with these principles, CNH Industrial’s approach focuses on four areas: increasing low-emission transport, adopting intermodal solutions, optimizing transport capacity and minimizing non-reusable packaging and protective materials. In this regard, a key target was set for 2024 which aims at a 20% reduction in kilos of CO2 emissions per ton of goods transported (inbound, outbound, and spare parts) compared to 2014.

As an integral part of its approach, CNH Industrial believes that actively engaging suppliers is key to achieving an effective, sustainable logistics system. To this end, the Company directly involves suppliers in most of its projects and initiatives, promoting and encouraging the development and implementation of the best solutions to meet CNH Industrial’s environmental impact reduction targets. As further proof of this commitment, some logistics providers were engaged in the CDP Supply Chain initiative, which monitors the CO2 emissions of selected suppliers.

The extent of the environmental impact of CO2 emissions is affected by: the number of inbound/outbound transport flows generating the impact; CNH Industrial’s ability to promote mitigation initiatives among suppliers; the initiatives implemented to reduce the impact; and the impact’s potential effects on the community.

Putting it into practice

In order to educate suppliers on sustainable processes, CNH Industrial’s logistics teams strive to give them practical working examples. One such example involved the creation of a new intermodal transport route – a combination of truck, train and vessel – for IVECO light commercial vehicles manufactured at the Company’s plant in Suzzara, Italy to dealerships and customers in northern Europe. “Europe’s motorway network is highly regulated and congested, and we faced a shortage of more than 150,000 truck drivers. With this in mind, we took it upon ourselves to find a solution,” explains Dror Noach, Head of Transport Logistics at CNH Industrial. Based on a specially adapted train, a bi-weekly service from the Suzzara plant to a new distribution center in Rheine, Germany was established, carrying 71 vans on a 24-hour journey across Europe. A third weekly train can be added to the schedule when extra capacity is required.

Once the vans reach Rheine, they are processed and shipped to customers as soon as orders are received. An estimated 10,500 vans will be transported annually. The benefits of this system include faster delivery compared to road-only transportation; a more stable push flow of finished goods, and a positive environmental impact thanks to a reduction in CO2 emissions of up to 2,100 tons per year. Examining the project in more detail, there were three fundamental steps in its implementation. The first was to identify a partner interested in transporting vehicles in the opposite direction, so that trains would not return to Italy empty. The second was to make the train sufficiently adaptable to carry various cargo loads, and the third was to develop the terminals at either end of the route. 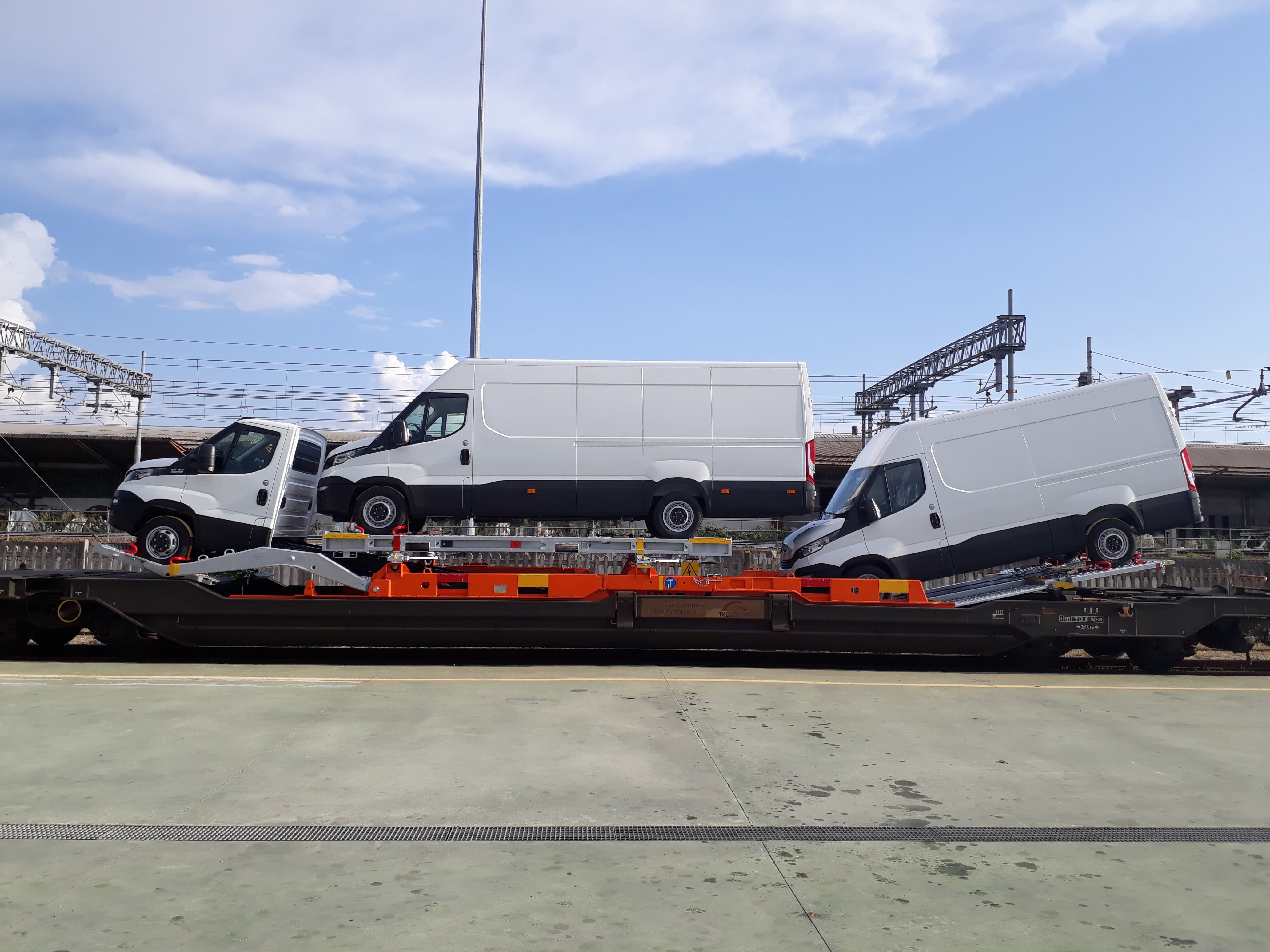 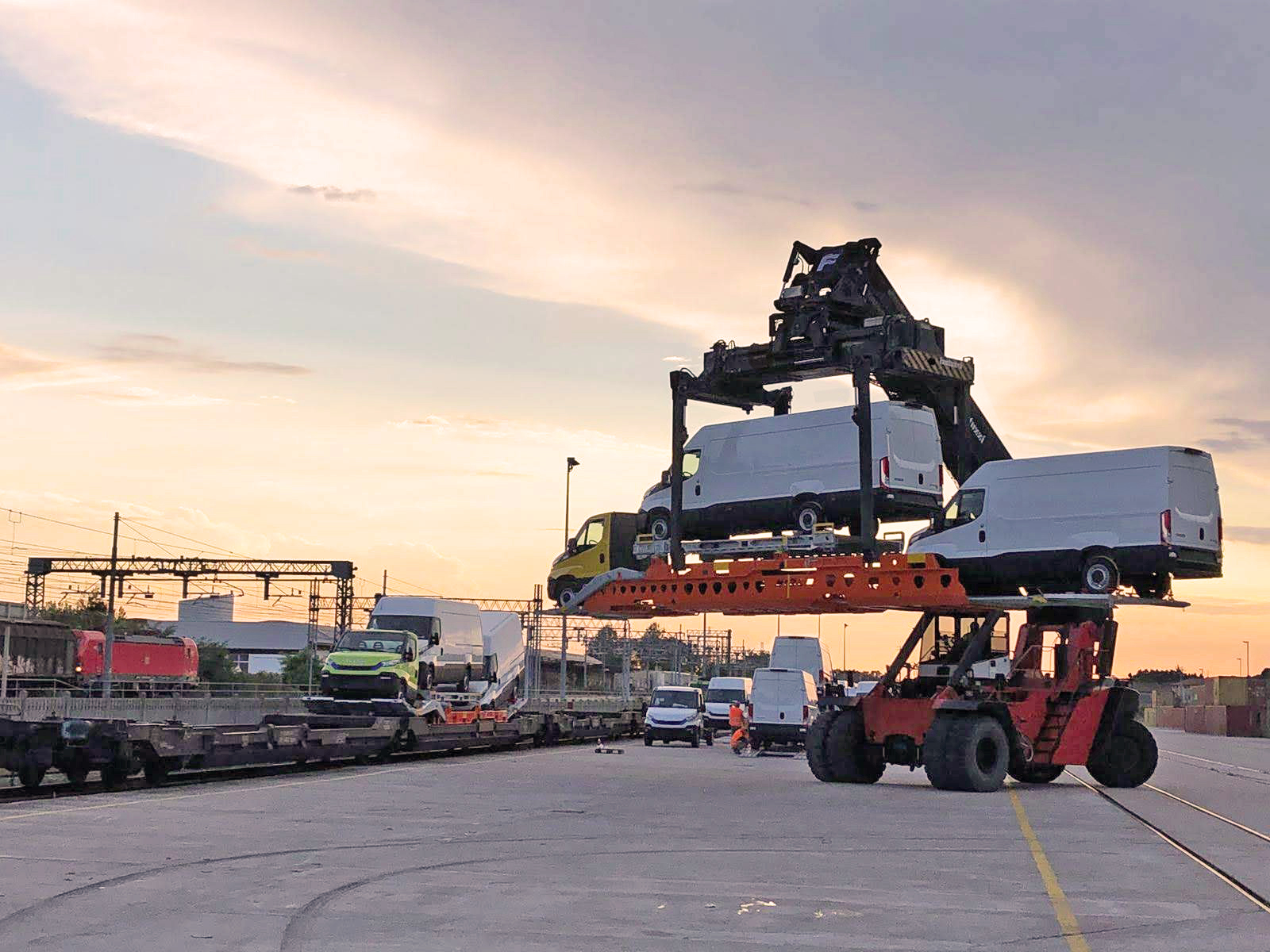 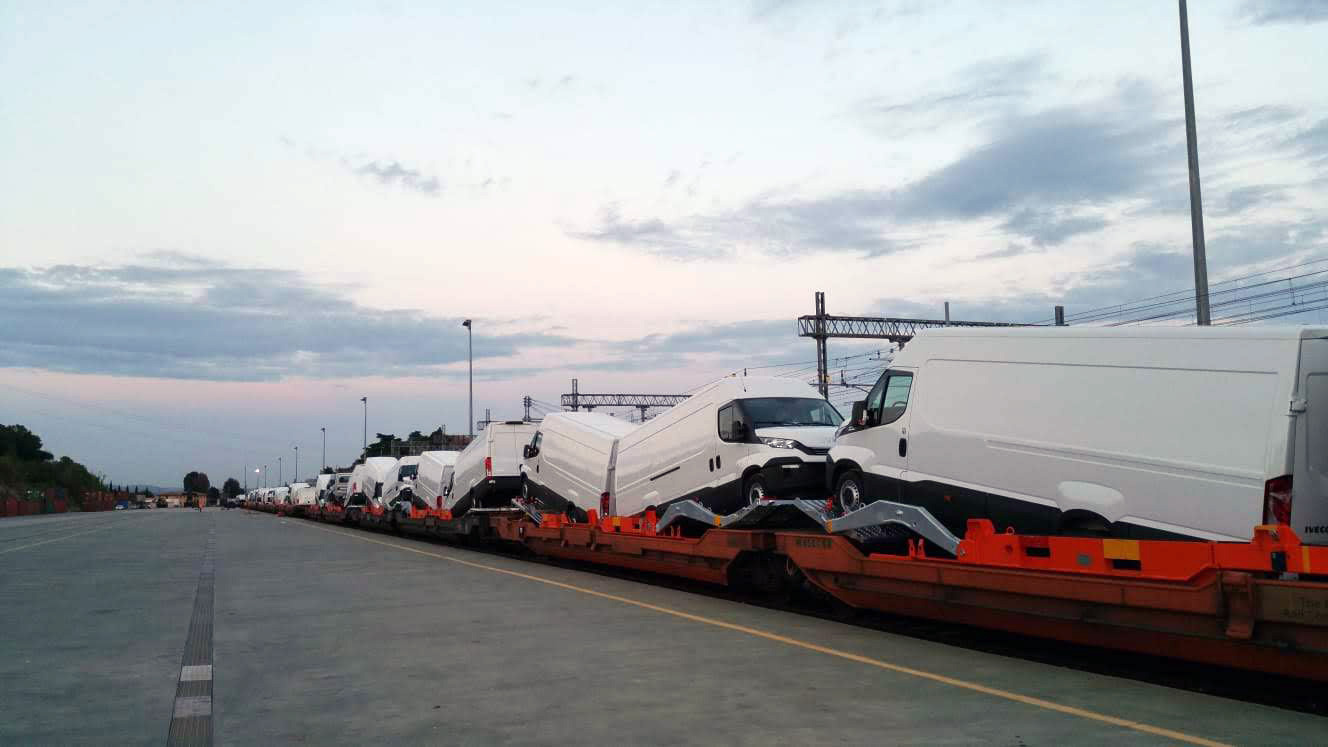 The Logistics team found two long term partners – Vega International Car Transport GmbH (Vegatrans) and YParco srl – which together formed a new company called Roadraillink GmbH. Thus, an ideal solution was created, as the new company had a balancing flow of truck trailers that it needed to transport in the opposite direction to CNH Industrial, without wasting a journey. The second step was for Roadraillink GmbH to design a special steel jig that adapts the structure of the train’s flatbed wagons so they can transport both vans and trailers. There are holes in the flatbed where the van wheels are located to ensure the profile of the load is not too high.

The new partners have also invested in infrastructure at the terminals. To create a fully intermodal – or multi-modal – system, it is essential to develop all the touch points where the different forms of transport meet, and the vans can be transferred using bespoke equipment. “Intermodal transport systems are highly efficient and sustainable,” says Noach. “We’re confident we can replicate this type of solution on other CNH Industrial routes and believe it will be increasingly used in the future.”

The inbound and outbound transport of materials can generate significant road transport volumes, depending on geography, infrastructure, and production levels. CNH Industrial always strives to promote alternative modes of road transport using intermodal solutions, with the aim of reducing both traffic congestion and CO2 emissions. Intermodal solutions take a holistic view of transportation services, treating them as an integrated logistics chain and employing a variety of solutions for the movement of goods from source to destination.